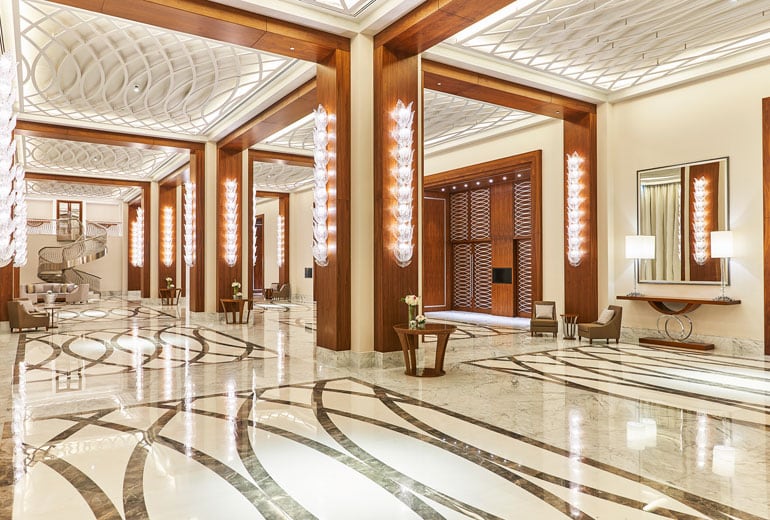 Soher furnishes one of the most luxurious hotels in Dubai

Soher’s luxury furniture reaches Dubai on account of a decoration project in Westin Dubai Al Habtoor City, one of the most luxurious hotels in the Middle East’s most prosperous city.

Dubai is probably one of the most fascinating places on Earth. It is the United Arab Emirates’ and all the Middle East’s most thriving city. It is, in fact, the fastest growing city in the world. And it is precisely there that Soher firm has taken its luxury concept thanks to a very special project: Westin Dubai Al Habtoor City interior decoration.

A luxury hotel whose construction has made it possible to reach the record number of 100,000 rooms in Dubai thanks to the 1004 suites that Westin Dubai Al Habtoor City makes available to the most demanding tourists.

Soher always does its best in each and every project, but when it comes to the task of furnishing and decorating such a large and magnificent place as Hotel Westin Dubai Al Habtoor City, our Interior Design experts face a great challenge, and they undertake it with delight.

The hotel lobby has been exquisitely furnished with pieces that combine design and functionality in a perfectly balanced mixture, and its marbles are dressed up in delicate carpets which bring us to the Eastern valuable carpeting tradition. Its impressive stairs made of noble woods definitely don’t go unnoticed.

Westin Dubai Al Habtoor City’s restaurants offer the guests different spaces with diverse personalities. From the urban and modern motifs such as the Cook Hall’s bar to the golden motifs, velvet fabrics or the glamorous Cocktail Lounge Blinq’s lamps, which instill all the magic and dreamy halo of the ancient Asia. We mustn’t forget the sober and majestic Il Capo, with a luxurious and distinguished atmosphere and a 1920s touch. And this makes only three of the eight gastronomic spaces in the hotel.

In the Al Joud Hall for weddings and events, the open spaces and luminosity prevail. This room is completely equal to the most elegant royal palaces on Earth.

In short, a luxury and exclusiveness dream in which we have had the honour to take part, making the most casual yearns for beauty and luxury into elegance and uniqueness atmospheres.