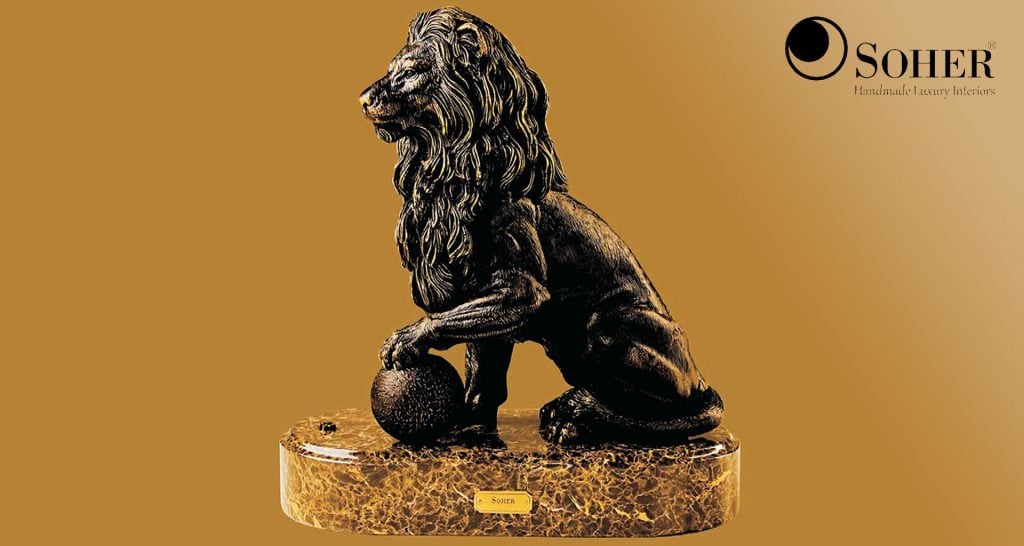 The presence of the lion in art and decorative objects dates back to the first chapters of History. From Soher, we want to present our bronze lion, one of our most solemn decoration figures, for both its artistic value and its meaning.

Worshipped and feared at the same time, the lion has always inspired a great fascination in humans. It is told that from the very gates of the ancient city of Athens, cradle of our civilization, the people would hear with terror the roar of the lion. The Roman culture domesticated them to perform their exotic shows, as well as for some other not so harmless purposes. In the East, the first representations took place in 208AC. There has always been a mysterious attraction towards this animal, in all cultures and epochs.

The lion has got a strong presence in the artistic eastern and western iconography, as in all kinds of decoration objects. In both cultures it shares a very close symbolism and meaning.

They represent strength, justice and courage. For this reason, they are present at the King Salomon’s throne, which according to biblical detail had a lion to each side.

In virtue of their strenght and bravery, they are considered to have protective powers against evil influences. That is the reason for its recurrent appearance as guardians of temples, palaces, monuments and important building.

Saint Petersbourgh’s Lions Bridge: inaugurated in 1826, the Lion Bridge, located at the Dostoievski’s neighbourhood, has become one of the greatest tourist attractions of the Russian cultural capital. On it, four impressive lions hold the structure with chains which come out of their mouths.

The Lions from Beijing, the Forbidden City: Fu’s Lions, also known as Buddha’s lions, are very common sculptures in the East. Linked to Buddhism, they are commonly found guarding the sacred temples of this religion. They also execute their powers in institutional buildings with government functions and meeting centres for distinguished people.

The lions watching over the entrance to the Forbidden City are of great beauty in spite of its horrifying and menacing appearance.

The Lions at the Congress of Deputies: Daoíz and Velarde are the names of the lions guarding the entrance to the Spanish Parliament, place where the popular sovereign resides. Sculpted by the master Ponciano Ponzano with the bronze from two cannons which took part in a national military victory, the majestic statues transmit all the strength and courage of the animal. Given its location, the lions depict one of their historical meanings, linked to the preservation of the empire of law.

The elaboration of elegant artisan bronze figures has been one of the specialities of our brand. Our horse sculptures are only one example of the bronze figures which carry Soher’s signature. The lion, of course, could not be less in our bronze representations.